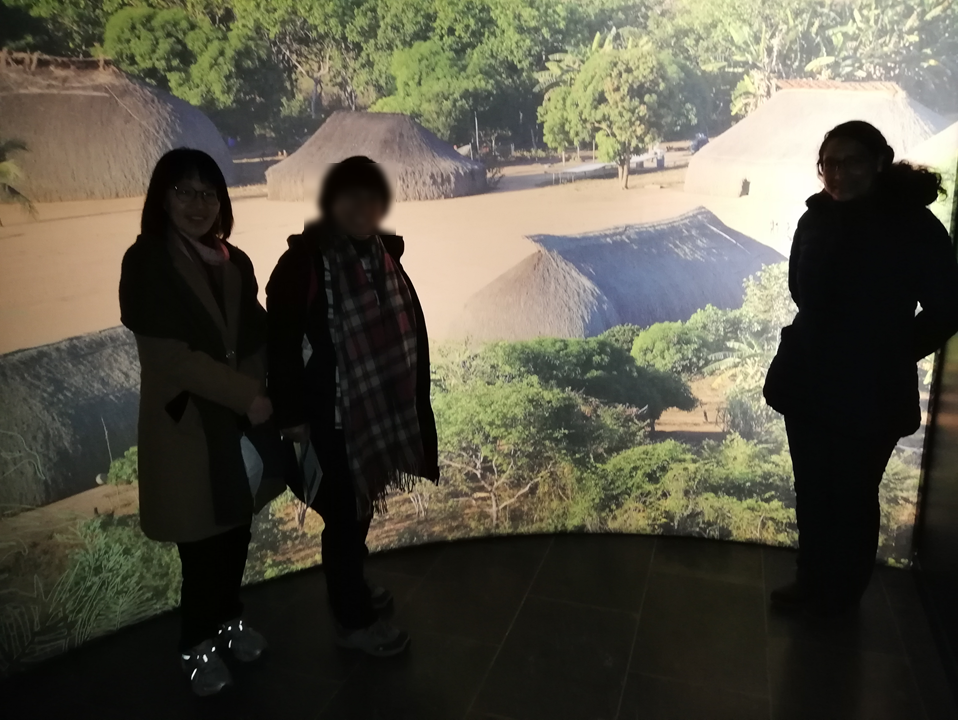 During the last part of our international experience, some of us Probanists were fortunate enough to visit the Convent of Sainte Marie d’en Haut, now a museum under French state ownership. As we entered and walked through the building, I was able to get an idea of the way our dear Philippine Duchesne and her sisters would have lived in those rooms. I was impressed by the panorama that can be seen from that height; it really is a spectacular place from where you can see a vast horizon.  All that immensity, silence and nature can easily awaken in us the desire to pray and give thanks to God for all his creation.

As I observed all this expanse, I thought that from these mountains of Grenoble, Filipina gradually discovered that somehow the world had no frontiers; perhaps, as she contemplated all this immensity, she felt called to go beyond. I felt that these places nurtured her missionary desire and from there she heard the gentle whisper that other lands began to call out to her.

I was very grateful for this time of contemplation and connection with our saint, her land and the places where she began to follow Jesus. As if that were not enough, this visit had a surprise in store for us.  The museum was hosting an exhibition on the Amazon and the people who live there. As soon as I saw it, I thought it was a happy coincidence that an important part of the continent that attracted Philippine was located in this very place. Now the faces, the culture, the daily life and especially the actions and struggles of its inhabitants for the care of our planet and the preservation of its habitat were present in the Philippine's own land.

As we walked along the route, I was thinking that this encounter was more than a coincidence;
it was really a God-incident - one of those signs of God's action in our lives and in the life of our world.

Philippine felt impelled to go to new horizons, attracted by the indigenous people of North America. Since her arrival, our congregation has been expanding, thanks to the dedicated lives of many of our sisters; 204 years later, we know other native peoples, we are in solidarity with them and sometimes we carry out collaborative work that allows us to live our educational service in reciprocity, but the reality of these peoples, our peoples, challenges us.

The photographic exhibition was really an immersion into this vast territory, a close-up view of nature and the cultures that inhabit it.  For me it was also a recognition of the prophetic dimension of the Amazon. On the one hand it shows us all the life that lives in it, its wisdom, the great diversity of languages, cultures and harmony with nature as a way of life; and on the other hand it highlights the levels of exploitation and the numerous attacks suffered by this "wounded and deformed beauty" as the Amazon Synod calls it.

This same text tells us “…the search of the Amazonian indigenous peoples for life in its abundance takes the form of what they call 'good living'.  It is a matter of living in harmony with oneself, with nature, with human beings and with the Supreme Being, since there is intercommunication throughout the cosmos. Here there are neither exclusions nor those who exclude, and here a full life for all can be projected…  For them, 'good living' means understanding the centrality of the transcendent relational character of human beings and of creation, and implies ‘good acting’. This integral approach is expressed in their own way of organizing that starts from the family and the community, and embraces a responsible use of all the goods of creation.” #9 Amazon Synod

During the tour, I saw a photo of the devastation caused by illegal mining in Madre de Dios - Peru. I was fortunate that I knew this place in the Southern rainforest of my country. When I saw it, I realized that this is only a small sample of the long list of attacks on nature that have negative consequences for the lives of the people, as detailed for example by the Amazon Synod. These include: appropriation and privatization of natural resources, such as water itself; legal logging concessions and the entry of illegal logging companies; predatory hunting and fishing; unsustainable mega-projects (hydropower, forestry concessions, massive logging, monocultures, highways, waterways, railways, mining and oil projects); pollution caused by the mining industry and urban waste dumps and, above all, climate change. But these real threats have serious social consequences: diseases caused by pollution, drug trafficking, illegal armed groups, alcoholism, violence against women, sexual exploitation, human trafficking and smuggling, organ trafficking, sex tourism, loss of native culture and identity (language, spiritual practices and customs), criminalization and murder of leaders and defenders of the territory. Our document "Artisans of Hope” states: "We recognize the broken body of Christ in the fragile and suffering earth".

But I also connected with the many efforts of Amazonian people and organizations trying to preserve their territory. I was very grateful that the photos were able to capture the strength and conviction with which the indigenous peoples are defending their territory, demanding recognition of their presence and their way of life. As I contemplated the efforts being made by our brothers and sisters in the Amazon, I became more aware of the urgency of the call to live the integral ecology that Pope Francis is calling us to live. I remembered that he tells us:  “…A true ecological approach always becomes a social approach; it must integrate questions of justice in debates on the environment, so as to hear both the cry of the earth and the cry of the poor. Laudato Si’ #49

This same issue of the encyclical has been taken up in our document, “Artisans of Hope”, which proposes three key objectives to address the need to care for our common home at every level:

This third point encourages us “…to be aware of the principal ecological issues, concerns and sources of hope of local contexts and people, especially indigenous peoples”. (P.21, Artisans of Hope) That is exactly what I was seeing throughout this photographic exhibition. 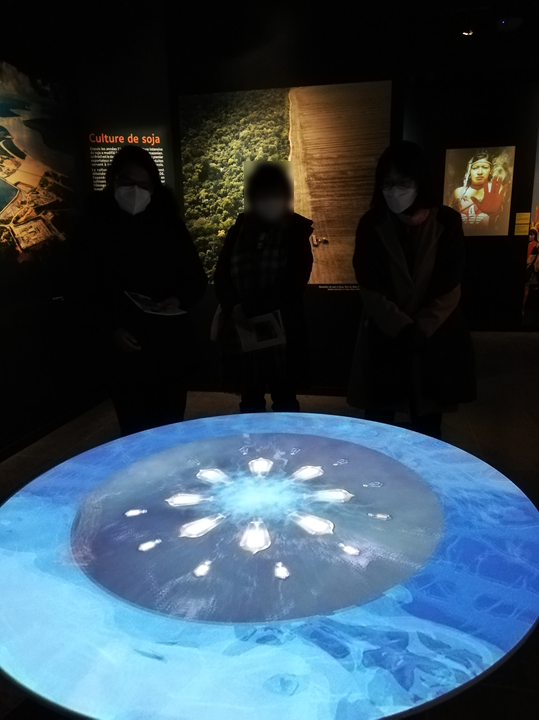 No. 49 of Laudato Si’ also tells us that both in political debates and in concrete action “… there is little in the way of clear awareness of problems which especially affect the excluded.” Moreover, it also tells us “… this is due partly to the fact that many professionals, opinion makers, communications media and centers of power, being located in affluent urban areas, are far removed from the poor, with little direct contact with their problems… This lack of physical contact and encounter… can lead to a numbing of conscience and to tendentious analyses which neglect parts of reality.”

This visit to Sainte Marie d’en Haut made me think that Philippine is not far away. She went out to the indigenous people, shared their concerns and hopes and now encourages us, urges us, to go out to meet them, to learn from their wisdom, to develop with them and share with them a culture of care. At this time when we are asking ourselves who God is calling us to be and what God is calling us to do; I believe that it can also help us to get closer to the way of living and working of the peoples of the Amazon and with them to contribute to the heartfelt desire of the Heart of Jesus:  abundant life for everyone and everything. (Chapter 2008)